Written by Newsroom Studio
Updated over a week ago 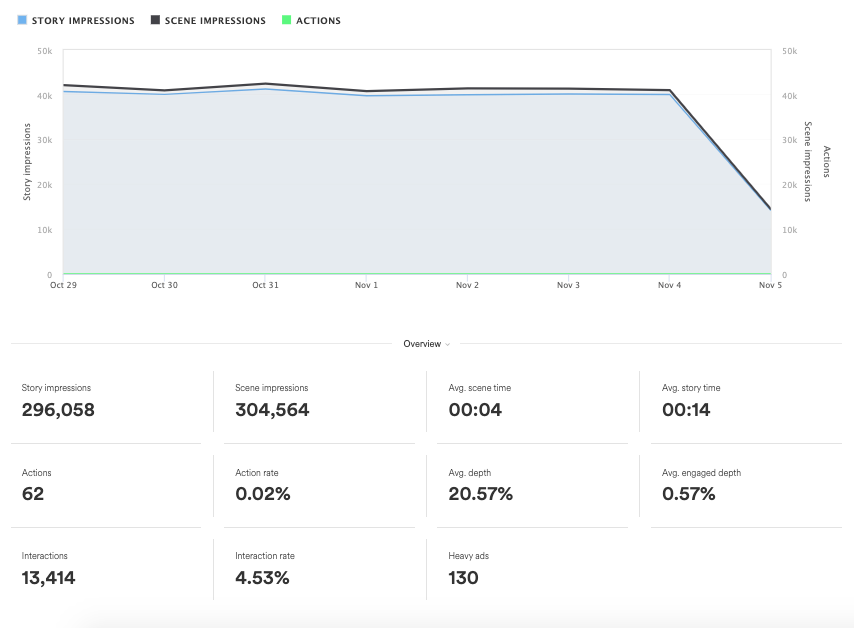 1.Story Impressions -  the number of times a story has been loaded, whether in or out of view.

2. Scene Impressions - total sum of all scene views, including views resulting from auto-advance.

3. AVG Scene Time - the average time spent on individual scenes. Every time a user changes a scene, we send a time e.g. 5 seconds, and it's the average of those. Auto-advance implies a maximum for this value. The timer is capped at 20 seconds, to prevent skewing the average when the page is left open, and there is no auto-advance.

4. AVG Story Time - the average time spent on a story, which is recorded independently from scene time and capped at 100 seconds if the browser is left open.

5.1 Actions (click-outs) - the number of CTA taps that open a URL, call a phone number or open an email client.

5.2 Attachments (swipe-ups) - the total number of Attachments that were opened in a story. Attachments are tracked separately to CTA actions, despite the buttons often looking similar.

6. SUR (swipe up rate) - The ratio of attachments (number of times opened) to story impressions.

In the case of auto advance, it may not be due to user interaction.

This is calculated as: (next scenes / story impressions) / number of scenes * 100.

10. Interaction rate (IR) - calculated as number of interactions / number of story views and shown as a percentage.

11. Heavy Ads - The number of times there was a heavy ad intervention (the story ad was removed by the browser for using too many resources).

Did this answer your question?